polly and the brain edited version

Many thanks to Danielle Joanne Hoggard ;-)


Posted by paulinesblob2.blogspot.co.uk at 2:07 PM No comments:

GOLD STAR TO EMMERDALE ON ITV

Last nights episode of EMMERDALE on ITV has taken acting up another notch, they have captured all the tiny details of what happens when someone is going through a Brain Trauma.

I felt Ashleys pain that he was going through in his head as he was undergoing a Brain Trauma, I knew what he was suffering.
I actually believed what he was going through and hoped he would come out at the other end.
When he was put into an induced coma; I thought:-
I hope his Coma doesn't last for many weeks that I've gone through!
I hope they don't open his skull to drain and air the skull area as mine was for many weeks.

There was an immense mixture of all kinds of emotions running riot around in my own head.
I had to call others from the North to the South and say "Did you see EMMERDALE!"
I felt that this Fantasy story was Real Life for me; why did I think that this fictional story was a piece of reality........Answer: Great Acting to Details.

I couldn't get to sleep as the mind was too active (although I was very tired!)
I thought about this Galaxy in my mind......
Did I actually go through the Galaxy before I came back to my mind?!?
Why did I want to paint a Galaxy for my Neurosurgeon Mr Umang Patel.
He's not an Astronomer, he's a Neuro Surgeon?
Do we all have little stars floating around in our mind which is our own Galaxy!
What a journey! 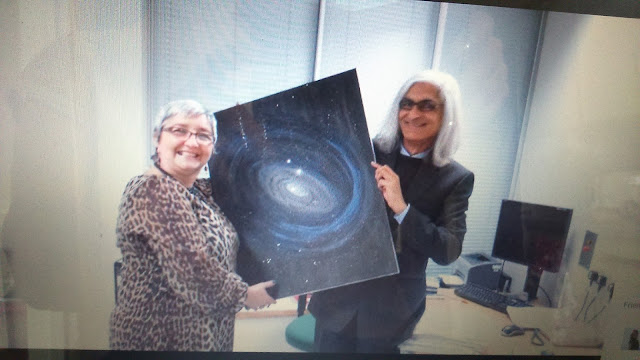 
Posted by paulinesblob2.blogspot.co.uk at 3:53 AM No comments: