Middle till the Medieval Market of July 2013


I accidently bumped into a most beautiful TRIKE as I was on my walk.


What does that mean in French?
Quickly!

I went into Sheffield to meet Emma Douglas from Neurocare Charity as she is leaving soon for a new job.
We had a lovely afternoon catch-up on our ups and downs of life.


On Saturday the 13th of July, I went to the Duckworth Ayr Show.
I had an early start with Janiece & David, we had a catch-up with Davids family for our day out.


I wandered around the park and told them that if I needed then I would call them. I said:- "I'll wait at the Yellow Plane!" and giggled! Can I remember a yellow plane?
Humour!

I went further into the planes and I saw a blue tented area, the persons there were all blue coloured with skip caps chatting and playing chess. I thought, this may be good as a picture for the blob/blog!
As I stood on the right side of the barrier, I raised my hand and waved to them all with my camera.
They all put there heads together for more talk........................they looked!
I waved my hand again!............................again the heads together to talk!
I waved again......................!
I shouted:- "May I come over to take your picture!!!"
They said "Yes!"
Now the RAF
Then I had a challenge to bend over to get under the barrier.............................Phew!
It took a few minutes and a bit of wiggling about as they sat and watched me.
I told them that it was a picture for my blob/blog, then they got intrigued about what was it all about.
One of the pilots (who is American) who Fly's for the RAF told me that his father went through this last November but he can use the internet!
He straight away said to me:- "May I have your email address for my father when we speak next time!"
I wrote it out for him and passed it over, then the pilots asked me if I would like my picture with them and then:- "What about a Cuppa!"
What pleasantness they all are, I should adopt them all!?! 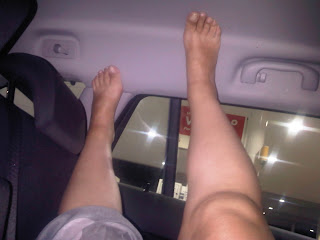 As we drove home, I lay on the back seat of the car and raised my feet to the ceiling to release all the fluids in my legs and ankles. Bummer EH!

I went to join the HEADWAY staff, I done the usual for me...............I DID without THINKING!
I'm terrible for not thinking properly first, Brain Injury Eh!!!
When I realised that they were having a stall, I just jumped into what ............I wanted to DO!
I never thought about anything or even anyone..................Selfish Eh!
Very Selfish!
I thought, I could probably arrange a little area and just put my 3 paintings on it?
I just appeared at the stall with a big bag which had an easel and 3 paintings!
See; ................ there I go again!!!
I should have spoken about this beforehand, as I had to find out if I could bring along my paintings.
I just wanted to let people see and learn about a brain injury and how it improves after time, for me, via paintings. I will learn one of these days!

I was going over to meet the staff at DORA, the Mental Health Champions suddenly a gentleman in his armour appeared at my side!
He's very handsome!

This is The Flying Buttresses.
Hodman Dodmano & Sally Forth.
She popped over to me and said:-
"You've put your rucksack on wrong?"
"It should be on your back and not on your front!!!"

Sally has a conversation with Hodman about this. I had a bumbag on not a rucksack!
Then I told her that sometimes I may do things the wrong way as I have a Brain Injury, Shock Horror!
Then they started to wonder if I was OK


Posted by paulinesblob2.blogspot.co.uk at 2:41 AM No comments: 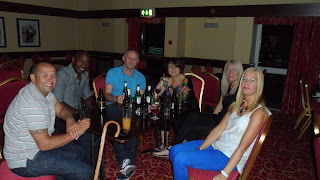 Janiece & Davids friends turned up to put a smile on my face again, they are all amazing!

We all had our private disco to throw away all the turmoils in my life with a dance.
I was going through a state of great  disturbance, confusion and I was uncertain about where to lay my head. I was backwords and forwards, did I know where I was really!
"All night long,.... all night lo-ong." 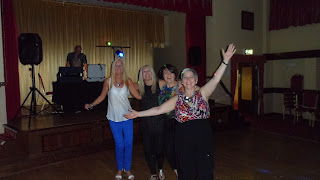 I must be an accidental person just now.
I thoroughly enjoyed my time at a BBQ, I was honoured to have been invited with their company.
Some people don't let the grass grow over their feet!

These lovely fencers had a great afternoon with some "to 'n' fro"!


My special volunteer time about The Heart!


After sitting at the front door for the British Heart Foundation it was a great thing for me to do.
The heart makes me think of Matt Jennings, my best friend from Osborn4 in Sheffield, he received donations and was with me for Neurocare Charity walking 5km around Rother Valley Park in his chair.
I want to try my best for the heart too! In July I wandered around with some flyers and a penny bucket to see if we can get some pennies for the heart. I put one foot forward and here I GO!
As I carried on walking around Chesterfield Market as a volunteerer for The British Heart Foundation, I heard a voice call; "Hi Pauline!" 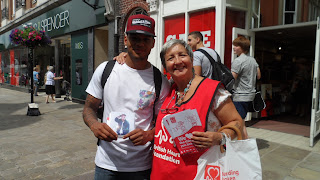 I turned round and seen an arm waving to me, I moved up to his face..............it was Jason Quainoo! I Hi'd back to him and gave him some flyers and told Jason & BLOCK about the HEART!
We had our little chat, it was only weeks since we last saw each other in the Market.
Another accidental meeting!
Amazing!!!
Time to fly and go, catch up soon!
I moved onto........! 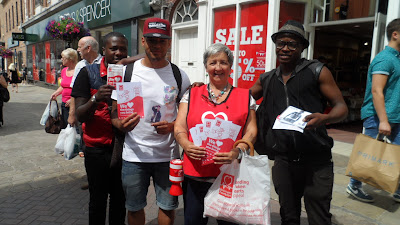 Scaffolding???
"Who's there!!!" I shouted up to the guys up on another level.
"I'll send you all a gift to read please!" They shouted back OK!
Well, very cool guys up there! 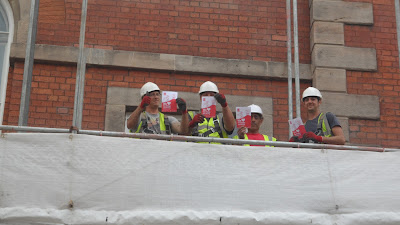 They all stood there and read instead of going for a cuppa tea!
Can I see a thumbs up there!!!
Cor Blimey!!!

I love it when they read about The British Heart Foundation. WoW!

When I had done my volunteering for the Heart, I went for a cake and coffee at Cafe Nero and chatted to Joe & Kaitlen and again when I was leaving I had another accidental meeting with BLOCK; the 2nd time on the same day! WoWseR!
BLOCK was rappin' to the customers and stallholders in the Market,

The first two weeks of July seem to be improving for me, I can only hope it will get better!
I wonder what shall appear on the horizon for me now!
7 days till my 2nd anniversary for the big fight for my life
Here goes !

Posted by paulinesblob2.blogspot.co.uk at 1:09 AM No comments: