After watching the Street Theatre with Bambolina & Dodo, I made my way over to Janiece and Davids home as they were having a family get-together.
When I arrived there; my friend Miguel was there which made me very happy. I'm his second mama.
We all sat down and had a meal together, there was....................10; Ten, wow! ten of us.
We then decided to play Street Cricket, very Athletic.................Hmmm!


Janiece stood on the side lines and did her babysitting, David was the ____catcher; if he ever seen it and Aaron and Adrian did the ___throw and ____hit. (Athletic words there! ) 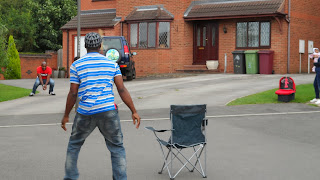 I thought that the _____watcher could sit in the chair but it's actually the wickets.........!
I'll just lean onto the fence, but what on earth is happening over there! 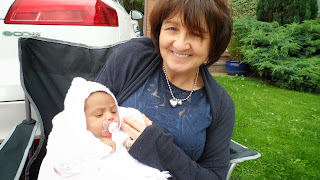 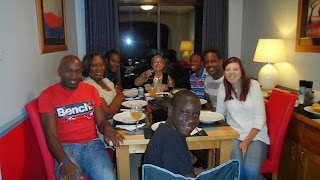 I'd actually out'd myself with the bat on the wicket.
I decided to call it a day and so did all.
June, Adrian, Tanisha and little Darcy finished their athletic afternoon, and made their way back to the hotel.
We all got ready for an evening around the T.V. but me...........I just lay on some blankets on the floor and started to read my Writers Forum Magazine. I'd finished reading the first few pages and then as I turned the next page; which was page 10, I GULPED!
The movie had another 30mins and I lay there and all I could do was open my eyes as big as saucers.
I never said anything until the movie finished.....Then!
I stood up in front of them all and said:- "Janiece, David, Miguel, Jake and Aaron, listen to this!"
I held up the Glossy Mag and said......"Ahemmmm!"

"LIVING WORDS"
"Last year, aged 48, I began to walk and talk for the second time.
I had been trapped in my body for nine months after a subarachnoid brain haemorrhage.
In the autumn I was asked if I'd like to run a 5km or a 10km course around Rother Valley Park, South Yorkshire, for the Neurocare charity. I said: "I'll walk!"
Towards the winter, I was invited to be the cover story for the Neurocare charity magazine.
I agreed but offered to write my own story for them.
The sponsorships came for my walk, then my cover story was published from my own hand into print.
I've also started a blog.
Words can give you inspiration to take you  further along the path.
Writing can be a great way to excercise the brain, to visualise your dreams.
I spoke to a stroke victim in New Zealand about writing a blog like mine.
Words are alive!
Words travel! Pauline Quinn,
paulinesblob2.blogspot.co.uk  "

Everyone got so excited, arms were flying in the air, legs were dancing, it was a private party, awesome.
We were so over the moon with the published article in a glossy magazine, I didn't think that I would ever accomplish this........Me! and my Broken Brain!


This has been my second written article and both of them have been published.
I must find another competition to apply myself too.
It's quite exciting to focus on my next challenge now.

Next day we all went to Lady Bower Dam.
The men were going for a cycle whilst Janiece and I went for the bus up the hill.
We were looking for a car vacant place then a lady assisted someone else into her car and I rolled down the window and said:- "Are you leaving now, can we jump in here next".
She explained that she would be a few minutes as she needed to bring the temperature down in the car before they leave.
As we started talking, I mentioned about carers as I had carers before but not any more.
Suddenly it was a case of :- "You painted with my husband in Killamarsh, it's you isn't it.....!"  Jeeeeeso!
Imagine being in a painting class with her husband, Rod Blount. Her husband and I, both had the brain injury with the same Neurosurgeon Mr Patel from Hallamshire Hospital; and the fact that we drive all this way to Lady Bower Dam looking for a parking space and find his wife, this far away from Sheffield and Killamarsh and just bumping into her as we casually talk.............. Unbelievable..............!

Can you actually believe this Amazing, Miracle Meeting !
A Miraculous Meeting !
Does anyone ever have so many accidental meetings with the most miraculous bond that I have with the majority of them.
A big WoWser from me.
I need to pinch myself............."Yip, I'm alive!!!"

As far up the hill that the bus we went to, we got off the bus and went to the picnic spot to meet the athletic cyclists. There's no way that I could even think of walking that far. I'll put my fatigue down to my brain injury.

The scenery was breathtaking as we were increasing the altitude above the sea level. (make sense!)
Well, it was just beautiful. 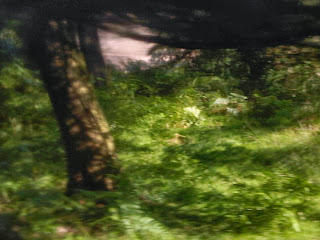 I have a great option of what to put down on a canvas to practice, get my brain more active. 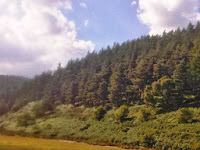 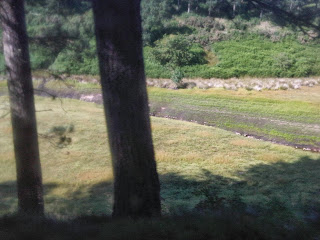 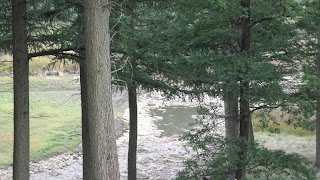 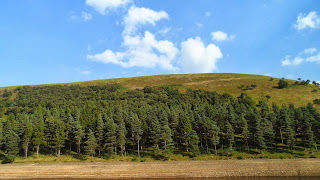 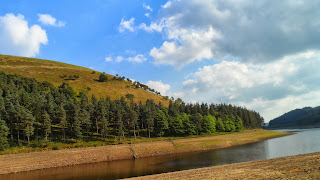 The sun shone brightly in the sky, then the clouds tried to join the sunshine party.
The sun went to hide beneath the tree's parasol to stop the clouds arrival. 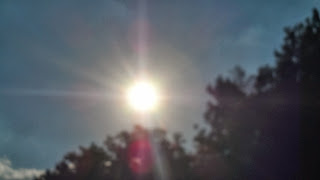 
Now we were going to the Corn Maze adventure.

Have you ever seen such incredible Loo's.

A great imagination by the designer.

I climbed onto the bridge to see where to go to next.

David watched me clambouring up the haystack and asked me to PLEASE not do this.....but I did!
I challenge myself all the time to see what I can and can't do......but I still keep trying!
You can't see David here as he's within an easy touch and it would ruin my picture to see him....Shhhhh!
I'm the King of my Castle or My Haystack ! 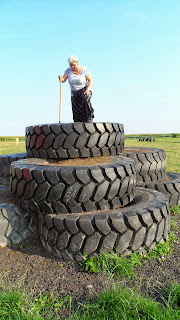 Here I go; back to reality for sure.
Janiece took me home for the Pest Controllers.
When we arrived these Pesty Controllers had arrived already and did what they had to do.
A few pieces of gel stuff and thats it......It's taken how long.....................! AGES, MONTHS & MONTHS!
The Antz are probably sleeping until next year anyway...............Let's see!!!
The next day I went back to Killamarsh as I had an appointment at the dentist.
I spoke to Jake about names and his arrival was Albert Einstein; he (Albert) formulated the special theory of relativity and the general theory of relativity and made major contributions to the quantum theory for which he was awarded the Nobel prize for physcics in 1922. He was also noted for his work for world peace.
Its Thursday 29th August 2013
In between I made two calls Oops!
Jane/Faynoula and Ellen, Shit, Shit, Shit..........Sorry, Sorry, Sorry Ladies.
This mouth of mine moves very fast
On the Friday I dropped into the lovely soft chair in Nero's for my treat, coffee & cake?
Any excuse will do these days.
I thought....................!?!?
I thought as I looked out of the window.
The main question that runs in my head regularly is:- (Why did no one appeciate me?)
I sit in the coffee shop and watch the world fly past me at a rapid stage.
What happened to doddling around!
There seems to be speed with the smallest step.
There is so much speediness with the smallest step.

I woke up and got ready to go 10 pin Bowling with Headway.
I just made it there in body and not in spirit.
Each bowl was so heavy for me.
I sat at the back of everyone else and kept myself to myself.
I couldn't be bothered with anyone, it could be more deep depression inside my head that I can't control.
The brain is a huge big computer, you just can't lock things away and forget about it, like a lot of people do.
I need so many answers to work out how and why this happend to me and so many others.
We all need the answers.
Today; Life was so heavy to carry on my shoulders.
I went to bed early, no reading, no daydreams, just sleep.
I hadn't been asleep for very long, then P.O.W!!!
I woke up sitting in bed with my arms above my head and I looked up at the heavens (the ceiling in disguise).
I started to talk, so here it is:-
"What I'd like to do is:-
I'd like to stand in the middle of the road and stop all the traffic, the cars, the busses, the shoppers, put my arms up into the clouds and screaming......WHY! WHY! WHY! ME!


Posted by paulinesblob2.blogspot.co.uk at 7:28 AM No comments: