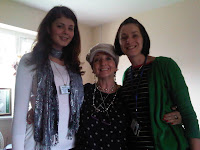 I got up my usually early time, my life is for the living, not slounging in my room.
I had another bit of time at the farm today, there was people coming from Derbyshire Link to interview me.
What Shall I wear today? What nail polish? What Bling.........?
I will make sure that I am well turned out for whoever was going to turn up and see me at the farm today.
I got ready and watched a little T.V. before lunch.
Then it was the Clowne Community Care Farm at 1pm.
When I arrived, the arrival of the photographer and the two journalists appeared.
It was Lee Mellor, Claire Staples and Natasha Bright, why am I so small...............!
I decided where we would all sit down to converse with our chit-chat today, it was a great experience for me.........."A Magazine called The Derbyshire Link"! I was very impressed with this meeting!
Maybe I should talk more these days! Well....... I do talk alot!
I decided to show them around the animal farm from young to old animals, and told them their names, which I had given to some of them personally.
I told them about "BRIAN " the pig, Brian Quinn is my brothers name, I told them about the photography and I mentioned that I knew this pig had no name yet so I gave him a name...........Brian! 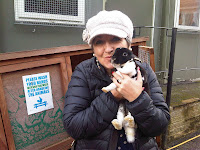 I introduced them all to Salvatore the black and white rabbit which is my favourite rabbit.
Salvatore is my Italian friend so I re-named this little bundle of rabbit as Salvatore!

We had a lovely afternoon at the farm, I wonder where next!
I got home and had such a beautiful evening with all my memories from the day.
Goodnight.

I woke up and had a quiet day.
There is a lot of sadness on the telly these days.
There was a Margaret Evison who wrote a book about her son Mark.
Mark was "A Soldier", he loved being that!
It was actually a difficult death, but Margaret wrote from Marks Diary, kindofa like mine!
Kylie Monogue - Cancer - Fighter.
I listened to the radio instead.
I just dreamed in my own head to dissappear away all the sadness in the world.
I'll be here tomorrow. Goodnight.

I got up and ready as I was going to be taken to the football game from Sheffield Wednesday today. 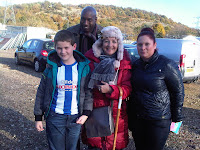 As David, Janiece and myself got there and found our seats and sat down, all the footballers ran out of the tunnel. I shook my hand over to David, pointed my right finger at a guy coming out of the tunnel with number 4 on his back of the strip and I said "That's your cousin Anthony Gardner, isn't 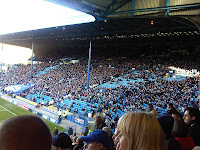 it?" David smiled at me and told me that I was right, PHEWwwwww! I got it right!
I was watching Anthony's every movement to work out what was happening on the pitch. 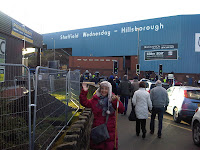 
Now I know! But why do the socks come over the knees!!!
Why do people spit on the grass!!!
Going to meet Glenn Dolby and Jacob after the football.
Maybe the video!!!!! Ask Anthony first please.

I remember seeing Arsen Weigner in Novotel in Glasgow. My old job about 8yrs ago.
Fabrise Muamba died on the football pitch, he was a miracle too.
He is a miracle now ;-) I shall twitter him tonight.
Fabrise is an influence to me too! 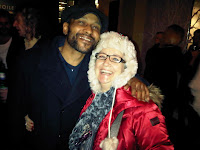 We went to Popolos and then La Foret.
Another interesting day, it has been full of adventure for me, totally wonderful. 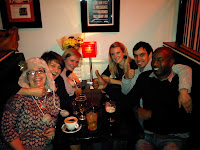 I looked at tidying up the back garden during the day. Job done!
A giggly day, a funny day, a hilarious day.
Got back to the rehabilitation house for 9pm.
Went to bed. Goodnight.

Got up and went to the farm, well it's a Monday morning again.
When I got back to Markham House, my sister Janiece came to collect me for a haircut at 3pm.
Hair, done.
Home for dinner, done.
No drinks or food after 9pm, the last pain in me, I hope.
Bed. Goodnight.

I had an appointment at 08:35am.
Wellbeck Clinic.
Fashing MOT!
My MOT, I guess!

PISSED OFF!!!
Someone says to me that I was not in the room when a decision was made about me!
My Social Service Lady.......Who? Who is she!!!
Why do people tell me tales!!!
Pissy Day!

Physio 1:45pm
Ian Lewain 2:30pm
HEADWAY meeting Dinnington, picked up at 6pm.
Stopping off at home with Janiece and David.

Another shitty day again.
Why am I getting into trouble for having my neighbour, Jools into my room!
Why can he not watch the telly whilst I write my blog.
Why can 2 brain injury people not have a conversation - communication.
Talking means that we are helping our brains.
This is CHALLENGING!

I have put in my diary about kicking everyones ass up the hallway!
I called Run By The Star and spoke to Lesley, she says that she thinks that I may have found the right Matt from Osbourn in Sheffield.
I cried through happiness, I can't stop crying.
I slept well. :-)

I woke up with tears still in my eyes, I cried all night with my happiness.
I have been so excited about getting word back from Rotherham.
I ended up sweating this morning, first time in such a long, long time.
Everything is Inspirational and Inspiring for me so far.
I phoned Run by the Star @ 10:40 this morning, it was Angela; she thinks that it is my Matt!
She will get someone to call me back when they have time.
The Farm was as exciting as ever with the animals.
When I got back to my temporary home, my Rehabilation House, I called Run by the Star again at 15:23, I spoke to Angela again and she mentioned she would talk to Nurse Sarah again.
I was having my dinner and the phone rang, it was just a number so I answered it and Nurse Sarah was on the line and she told me "YES!" we have your MATT!
She asked me to talk to Matt on the phone, I was so full of joy, his noises were so comfortable to me.
Nurse Sarah told me that I can call round and pop in to see him anytime I want too. WOOHOO!
I smile the biggest smile now.

I have asked to stop over with Janiece and David tonight, me going home!
I did my physio and some poetry.
I had Katie at 10am and told her that I shall cancel their questionnairre.
I will not answer any questions, I have my rights, whether I want to answer or not! 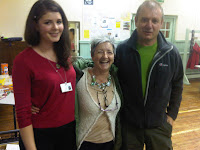 Janiece came to collect me at 2:30 pm to get ready for the early Headway meeting
I had been out at the Headway meeting with Janiece, David, Steve Jones NHS Brain Injury and Natasha Bright from The Derbyshire Link.
We all had a good evening until I got dropped off later in the evening; woopsadaisy!
My question is this!
Is this my home! I thought that it was! Obviously not!
Why is there a big drama about my time that I come home.
Someone went on to me at having drugs/medication at 10pm..............SHOCK/HORROR!
I'm not in charge of the medication for me or anyone else. Confused.........?
I think that we should all have minutes of everything that happens in here..............?
I'm totally confused now!
If I was going to be a little late at coming in after 9pm maybe I should have been given my medication out.
Maybe the medication was too young to be out playing with me at this late time!
As I talk to my new Brain Injured friends, there is a new word with a lot of us; "divorce"
It doesn't need to be a marital position...................!
Earlier Someone text me at 18:11, Goodbye.
Goodnight.

I got myself ready to go and see Matt Jennings. 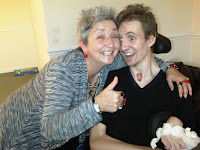 When we arrived, the area was beautiful and this is where the Star lived, wonderful.
Matt was then arranged to be in the chair to join Janiece and I in the lounge, I was going to read my stories that I have written about him on my blob/blog..
It was an exhuberant day, I talked, danced, smiled, focussed on making Matt have the best day today.
I felt that Matt was having the best happy day, I hear what he says through his eyes.
As I was talking out the stories that had Matt in them from the blog, I was very dramatical for him.
My arms, legs, head, all moving up, down, left, right. It was amazing, I was kidding on that I was the best dancer here and I was moving very exaggerated, Matt moved his toes off the bottom of the chair as if he was dancing too, that's what I thought! WOW!
Then Paul Jennings arrived, Matt's uncle, he asked me if I knew how to talk to Matt, did I know how to communicate and get a reply from him?
I never knew about any way of talking  to Matt, so he showed Janiece and I how to do it.
Uncle Paul said it was the Alphabet Language for Matt to talk back to us!
Paul said;
"Matt, if Pauline comes to see you another time, is there anything that you would like her to bring for you?"
"Also is the alphabet going forwards or backwards, I'll say now"
"FORWARD"
Matt made a tone from his mouth.
Paul said to me;
"Pauline, start with saying the Alphabet, start at A!"
Janiece brought out a pen and paper and was ready to write all the letters down.
I started;
"A" -no answer,
"B" -no answer,
"C" -Ahhhhhh, I notice a noice from the vocal tones, Brilliant!
"D" -no answer,
"E" -no answer,
"F" -no answer,
"G" -no answer,
"H" -AHHHHHHhhhhhhhhhhhhh! "C", "H", we went on until "O" & "C" I giggled and told him; "Are you looking for Chocolate! Oh My God, you DOOOOOO want Chocolate!"
We carried on and it was a Chocolate Cake that he wanted me to bake and bring in for him!
I had a great day out seeing Matt, I'll look forward to baking for him soon.

Now here is another question at the end of my day here in my Rehabilitation House?
I do get rather flustered at times about the times?

Did I not get into trouble last night for arriving home at 10pm to take my medication!
Oops! An early Headway X-Mas Party!
3 people tonight are counting money which is more impotant than giving me my medication.
I must go to some educational classes to learn these new steps for a Brain Injury Person.

Got up and dressed and moved over to Janiece and David's house today as my body is so tired with all the hullahballoo goings on here!
Thank God!
Goodnight ZZzzzzzzzzzzzzzzzzzzzzz
Peaceful ;-)

I woke up early at 07:30am and started to organise the baking materials for my baking as I said that I would bake some chocolate fairy cakes for Matt.
Great baking today for Matt.
When I eventually got home, someone came up behind me and put the fingers across my eyes. Someone else said to me, "Who is it?", I felt the fingers and rubbed the knuckles and I said, "Ah, King Jo!" = CORRECT!
Later I spoke to Tam Hodgert on the phone, I must go and visit them soon.
Sleep Well. ;-)


Posted by paulinesblob2.blogspot.co.uk at 10:20 AM