Have you noticed as I have noticed;-
I've read the end of last year and the start of this year to catch up on my blob; Well,,,,,,,,, where was my head at the time!!! The odd words and the pictures and some pages don't even tell you the date and the month, it's definately a wishy-washy-diary!
Sorry readers, it's my Brain Injury or my Lack Of Brain Energy!

David whisked Janiece away to a beauty of a secret destination for her Birthday, That IS LOVE! <3
On the 2nd, I got invited to Killamarsh from the Killamarshians for a Neuro catch up chat for our Rother Valley Park run and walk on the 21st April 2013.
I may, one of these days, make a necklace with a theme!
Debbie & John Does, Richard the interior designer, Leanne & Ian, Andrew, Sarah, Marie, Janiece & David et Moi!
There was a Soul Musical Evening for us all. 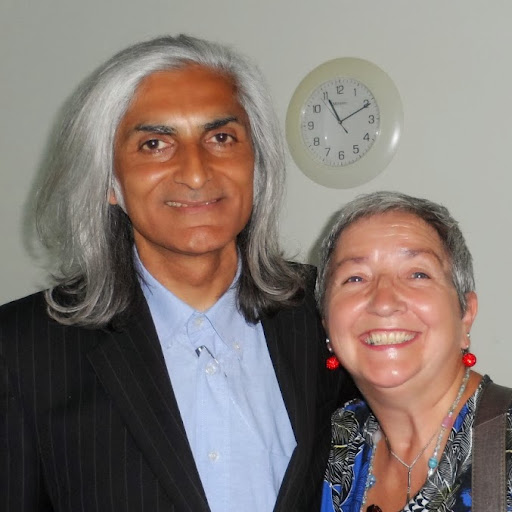 As I was walking home, I looked into a shop window.
I tried the door; it opened.
All of a sudden there was some hair moving from behind the tall reception counter.
Straight away I said, "Can I use the Loo!"
I'd prepared myself and passed him my Headway Card, he smiled and pointed me to the other door and asked if I was ok walking up the stairs! I said "Yes" and ran up the stairs........ relief!!!

When I came back down the stairs with the big grin of relief on my face, he passed out his right hand and said "Simon", I introduced myself as Pauline and we smiled.
Simon asked me about my Brain Injury, as that's what it says on my card. Well............................ it says:-
I am a Survivor of a Brain Injury
I may have problems with my memory, 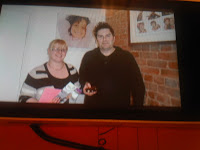 speech or actions. Your help and
patience would be appreciated.
Then Simon says to me "LOOK!" as he pulled away at his hair. He told me that his Brain Injury was 9 yrs ago,and he had 2 aneurysms.
His Neurosurgeon was Pr Patel!!!!!!!!!!
WOW!!!
Suddenly a lovely blonde walked out from the back room and all she was saying was; "All I can hear is Mr Patel this and Mr Patel that....... I can't believe that you have had the same Neurosurgeon!!!"
Mr Patel raised money for Simon as he was a Ticking Bomb!
This blonde from the back room is Sarah, they had only just started dating 9 yrs ago and then that was when his Brain Injury occurred. Simon and Sarah looked at myBlob/Blog on the computer.
WoW, what an accidental meeting!
This is amazing! 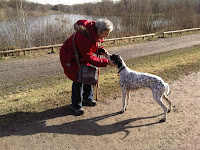 They were all working hard in the grounds of Holmebrook Valley Park.
Imagine all the animals from a cartoon movie and they just want to talk to you. It was amazing the attention that they gave to you. Superb! 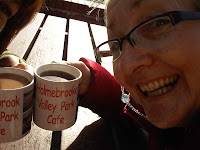 A nice wee cuppa char!
As I went on to the internet, in the Library, Paul turned up and gave me an envelope, and quickly dissappeared. All I heard was; "Come and see me before you leave. OK!" 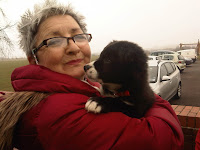 Well when I finished with the internet I decided to look for Paul.
I found him down at the reception.
When I got his attention, I asked: 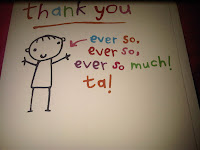 "This envelope; do I leave it shut and pass it onto Emma Douglas at
Neurocare Charity or do I open it up and see what is there???"
Paul says, "Open it up if you fancy doing it"
I opened the envelope and started to cry. Paul had put £50 pounds in it.
That came straight from his wallet. I'm GOBSMACKED!
I ran around to the shop straight away and bought him a card for sponsoring me for walking for Neurocare Charity at Rother Valley Park.
My colleague volunteer's at Ashgate Hospice 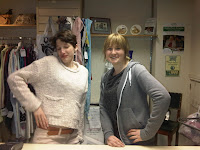 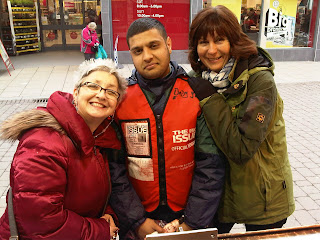 This is my friend Raphael he is such a strong worker every day. He sells the BIG ISSUE every day. Raphael does what he can for his mum and the other younger family members.
He's a good lad, Good Luck Raphael. ;-)
The pictures are from the month of March, but they just will not play with me, Darn it! I can't turn them round; I very rarely move a picture a little teeny-weeny bit! 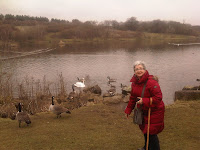 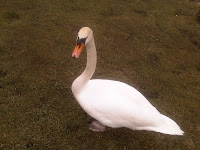 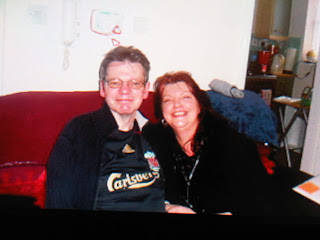 It snows again, how long will this last for. 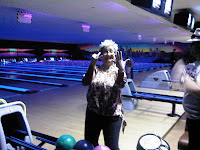 Hey, I don;t know what I'm thinking about here!!! 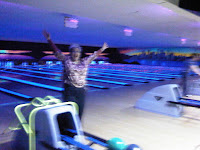 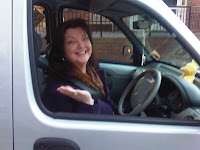 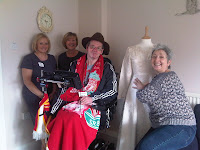 I went further into town and met up with Matt from Headway, I heard that he was off to the Neurosurgeons meeting that evening with Peter Shaw from Headway North-derbyshire. I went to the local shop quickly and bought a card for Mr Patel, so I ran all the way round to get Simon to write on it. Then I wrote on the card  and also gave the little THANK YOU TEDDY for Matt to pass onto Mr Patel from us. Perfect!
The next day, Sue and I went to Barlow and visited the parish church, it's a 15,000 centuary church.
We went for a coffee and cake, then the waitress said "Hi"
She recognised me from the Neurocare Charity Issue as her friend Kate P had showed her the Issue.
Surprisingly, Kate's sister was Jo my roomie in Osborn 4 in Sheffield. She knows about my blog and my charity 5km walk. I'm surprised how far my picture has gone.

Thursday 7th March 2013
Another day with Sue, I've started to Ramble with the Ramblers in Chesterfield.
I took a thankyou card to the Library for Paul and introduced Sue to my new link to the outside world.
I seen that I had a missed call at 1:45pm, I wondered who it may be?
I waited until all left and I called the number at 5:04pm; Bloody Heck!!!! It's Barbara Rafferty!!! GULP!!!
My head was spinning all over the place, it's been how many years since we met down on Byres Road Eh!

Friday 8th March 2013
I went into the Library and brought up the FB, learning from the internet is a great wealth of information.
It's great to learn that a lot of us have similar after effects from our Brain Injurys.
I saw that someone made a comment about me, as far as New Zealand on FB! WOWSER!!!
I'm learning constantly, I usually go back in time to see what the topic has been that day.


I went back to Killamarsh to celebrate Lianne and Johns Birthday.
We had a Northern Soul Weekender, the group was good.
We danced all night long!


I had a conversation with Mark Marky, we spoke about a Dongle and my returned reply was:-
I giggled as I read "Is that something about.......OOh Err Mrs!"
What a wonderful, nice friend,
I giggled for the rest of the day.

I was walking into town but unfortunately I met two young men, fresh as Daisies.
They asked if they could talk to me about the lord!
I said:-
"I know him, I've been there and seen him!"
They gave me a bible and their card and asked if they could talk to me. I said "NO"
"Thats too much for me to do! I'm a Catholic and I won't change for anyone, OK!"
I had another meeting with Steve, my Brainy man, and I told him "Not to bother with the reactions that I had gone through." I appologised to Steve and Katie for all the stress that I had put them under and I needed to get rid of it all and they were the ones right in my line of fire.
When you speak to Brain Injured people, there is one word "Control!"
We can talk about this for a long time but I'm fed up with this word.

I went to Headway and I saw the lovely Jenny, she has the same brain injury, memory/time effect.
As I entered the room all of a sudden Jenny said:- "Hello Pauline!"
She had the biggest smile on her own face as she knew that she remembered me!!! WOWSER!!!

I went to a beautiful Christening in Stafford with Dylan, Hannah & Carl.
The money started to have growing feet, which moved towards Neurocare Charity.
Where is Spring!
I spoke to Steve Moslin about my legs, so hopefully he will do his magic on them next week..


Posted by paulinesblob2.blogspot.co.uk at 4:49 PM