My new Brain Injury friend asked me if i'd like to pop along to the Specialist Stroke Services?
"Wooo!" I answered
"I don't think I've ever heard of this? Sounds good though!"
Chris explained that he goes there to make "A Wee Cuppa Tea" every week.
He does tea and someone else does coffee.
He makes "A Blinder of Tea!" we laughed at that.
As we travelled on the bus to our destination, we continued with all the laughter first thing in the morning.
The passengers suddenly shooshed (went silent)!
We were a bit loud....Oops!
The passengers were intrigued with our conversation as I turned my head around. You know me.......Nosey! I was wondering why there was no regular talking anymore.
We had a regular tissue up to our eyes, we spoke about our eyes too with heavy laughter.
We were in control or our waterworks down below and mentioned that too.
The bus went into uncontrollable laughter ..................... Hee Hee!
The gentleman who was sitting three seats behind me got up out of his seat and walked up towards us?
As he had the laughter coming from his belly, he bent his head down towards his waist and muffled into his belly; "FEEL HERE!"
Well the both of us moved our hands over to his head and then we all went into ruptures of laughter all over the bus. "I've had the same Brain Injury too!"  he said to us.
As we were getting off the bus, I looked around at all the passengers, they were all in great humour of their own stories of family, friends and neighbours. They were greatly Happy! I was Gazumped!
Your sad story can turn into the rupturous, belly hurting tummy with laughter ache.
He hadn't even made "A wee cuppa Tea yet!"

First destination; The Kitchen; but Chris seen Debbie Newton and he introduced us both to each other.
Chris dissappeared to the kitchen, people were parched, waiting for a cuppa!
Debbie is the Service Co-ordinator of this Specialist Stroke Services group.
She said to me; "We keep missing each other on the phone!"
Straight away I thought; (Do I recognise her face? How did I get her number? Bummer; Just act silly?)
I said that I had her number but it wasn't my writing, it must be hers?
We went through all the "Was is Jimmy, Eh! What about Freddie? Sonya, Mark, Henry......etc!"
We think it may have come from a Headway person, still no idea though.
Brain Injuries Eh! 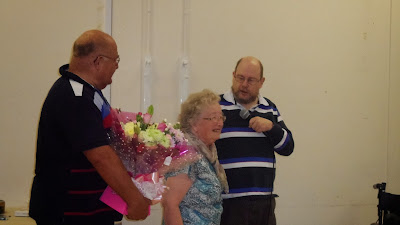 Chairman Tom, asked Marjorie to make her way to the floor as he had a little thing to say to her. In the meantime; Chris appeared from behind her as he handed over the bouquet of flowers for her Birthday.
The room sang the loudest happiest HAPPY BIRTHDAY MARJORIE.
XXXXXXXXXXXXXXXXXXXX
From the bottom of our hearts <3 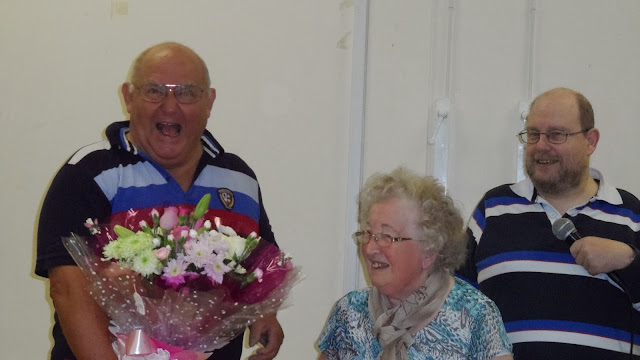 MY IMAGINATION
Chris actually thought........Are they for MEeeeeeeeee!
We all had to be very gentle; and bring himself back to the ground, back to normality.
He was flying above the ground and dancing on Cloud Nine.
Chairman Tom gave him a shoulder to weep on when he gave the flowers back to the Proper Birthday Girl.

STILL MY IMAGINATION
I imagined my conversation was;
"Who's he, him over there! Him with that metally silver talky hand thing is it a....micro.... thingy phone. A voice louder thing?"
"An entertainer!" came from the audience.
"Is that metal thing in his hand an entertainer then?"
"WORDS" This is actually difficult; when in my brain the word is there, I can see it, I know what it is and what it means....BUT,....to get the word out of the tongue, mouth. EeeeYaaaaa! 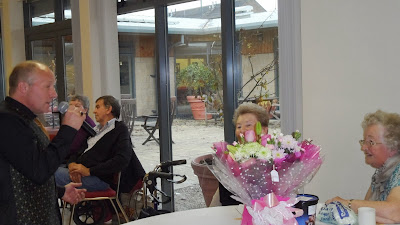 He sang and looked into her eyes.
Marjories Song. 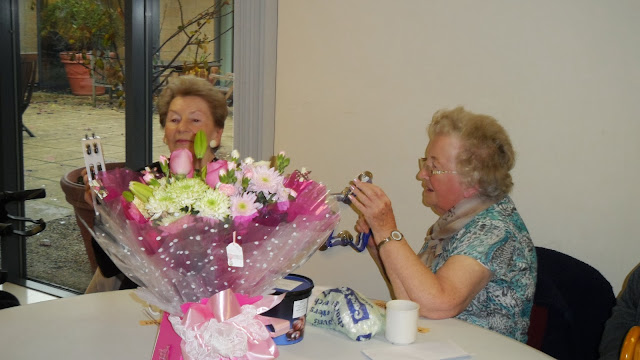 What a great day for "A wee cuppa Eh!" 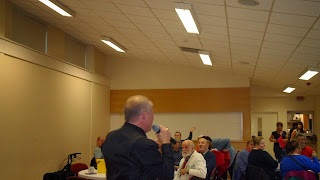 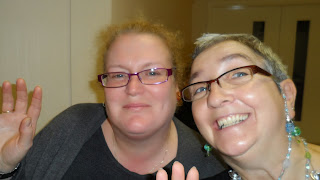 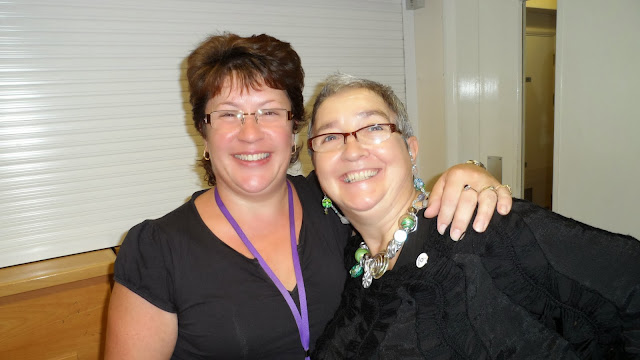 I had a lovely chat with Tracy. 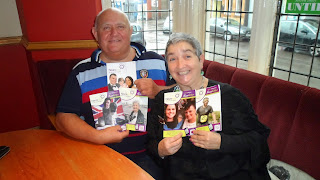 I spoke about my aneurysm. My usual stuff...boring!
I brought along the Neurocare Issues for anyone to have a look at.
I mentioned what I wrote about in my cover story and I took my Writers' Forum  magazine too.
I also mentioned about doing the blob/blog.
That was funny; the blob still gets a laugh.
I left them at the side for anyone to look at them
It was time to go then Chris and I went out for dinner and a chat....
"What's Next I Wonder!" 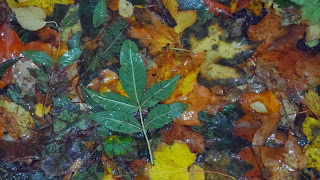 Wrap up, there's a nip in the air now!

Posted by paulinesblob2.blogspot.co.uk at 6:27 AM