I'll start off with my writing error in the last blob WHY! WHY! WHY!
My writing can sometimes run away with itself, my errors are:-
It was appeciate.........instead of appreciate.
Then for speach in the inverted commas " is at the start of dialogue, then when you finish, Oops! it's gone!
What happened to the last inverted comma; possibly tiredness, who knows?

Right,.............
It's a Sunny September morning.
When I woke up and visited the loo, I squeezed my right eye as I was looking into the mirror, I rushed to get the camera to take a picture of my eye. What happened there...........!
I was going for different angles to get the right picture for you to see.

How on earth did this happen?
My neighbour asked me if I poked my own eye?
"Bleedin Heck" I said.
"Do you really think that I poked my own eye, why, what reason for that!"
I just laughed as I walked on.
I got ready and left for Mass.
Its Sunday 1st September.
I went to Mass and went up for a blessing again.
I kneeled down at the altar and said a little prayer then tried to rise. Oops!
It was a struggle to raise on my feet.
Eventually, I was up and tried to walk back to the pew where I sat.
A lady brushed against my elbow as she seen me crying behind the stone pillar, I thought that I was unseen but I wasn't. My body, especially my feet and legs were in pain..............Oooooouuch!

On Monday 2nd September, I had another appointment at the Dr's about my feet and legs.
I told the Dr that they are "Dun-In!"
Maybe I could put in for two replacement feet and legs. You never know!
I was given a tub to drop off there on Tuesday morning.
Very glamorous, it's for my specimen; Yukkkkk!
I struggled to walk that day.

I was invited by all staff from DORA to attend their event.
Alan Smith, Chairman for DORA was sitting on the panel on stage.
Roland Gray is the Volunteer Manager for DORA
I'm very, very impressed with Rolands writing; he was in a party of writers for the JIGSAW book.
JIGSAW is a collection of poems, short stories and drama extracts.

Ambling, rambling, brambling without care
Rolling, trolling, strolling on air
As daisies drip dewdrops and dream of a chain
Time drifts and eddies down Cucumber Lane

Morning's first beams on the run from the sun
Pausing to hide behind trees just for fun
Weaving through leaves to dapple the scene
A Cucumber sunrise, golden, serene

Candyfloss clouds on a sky of deep blue
Softly suffused with a rosy pink hue
The sun slowly sinking, the Lane in twilight
Peacefully drifting from day into night

Cucumber Lane goes from here to there
Twisting and turning its way past somewhere
Eternally changeless, never the same
Bramling's forever down Cucumber Lane


Now back to the Winding Wheel.............
I'll keep a close eye on how I can write better.
When I walked through the door, this taller figure turned around and said;
Mayor; "Hello Pauline!"
Well, I took a big Gulp and then I replied;
Pauline; "AH! Hello Mayor, How are you! It's nice to see you again!"
We keep bumping into each other these days, another accidental meeting friend.
Pretty Cool actually.
I spoke to the Mayor about  this and that; the usual stuff from me.
I had taken my large and smaller House of Commons envelopes with me; just incase is my theory.
In the hall, the panel was up on the stage.
I chose to take a seat in the front row, I thought that if I put my hand up to say something then everyone would see me. If I sat in the back and put my hand up to speak, maybe they may miss my hand amongst all the others, you never know.
The panel spoke about going to the Government and hopefully getting great answers back.
I held up my large Commons envelope in my hand and asked that if they get new words accepted; does that mean that they all have to play the same ball! Does that mean that Nurses, Rehabilitation Staff and even Family work by the same words that are brought back from the Government.
The answer was Yes! I was over the moon with these words. 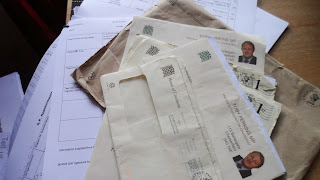 I've had work being done by the MP in Chesterfield.
Mr Toby Perkins; he's the Labour Member of Parliament for Chesterfield, he is the Shadow Minister for Small Business (BIS)
WoW....!
Mr Toby Perkins was and has dealt with the Antz in my home, at last; someone who listens to me.
"At Last !"
I haven't finished yet..........
On my last day at my Rehabilitation Home, Markham House in Bolsover, I asked the staff for a copy of my files.
I wanted my files for my own history here, I was refused as they said "No Ink?"
I said:- "When you do get more ink eventually; send my files over to Steve Jones at Clay Cross, Hospital, Chesterfield, surely you can find out his Brain Injury address; surely, surely!"

I Waited until NOW!
YEEHA!
AT LAST!
The pieces that came back so far is from the assistance of Mr Toby Perkins MP of Chesterfield.
I eventually recieved some of my health records and nothing else.......!
Who wrote about and What was written at My Review Meeting that I was escorted from on the 20th July 2012.
Oops! Nothing on my files here!!!
Surely there must be files on days when my family arrived and had meetings with the Manageress.
Maybe it was just knitting classes again???
I'll come back here soon as I need these peices of information for my book, why write a book when some people just give me minimal pieces of my life.....WHY!!!

Wed 4th Sept
Had a little headache, then it quickly left my head.

Thurs 5th Sept
Got up at 06:30am for the loo, then jumped into bed and lay on my left side.
The alarm started to ring at 8am but it wasn't until 08:10 when I woke up and seen the time.
I had numb fingers; I hope that it's me putting pressure on my side.
As I'm writing this to catch up for the last couple of days; I can see me missing some letters.
The writing is becoming untidy!
Why did I write an E as an e from my primary school writing?
Crazy Eh!
Needed to go back to the surgery for the Phlebotomy (Blood Samples).
Give them my blood --- bloody hell !
I have a teeny weeny headache behind my eyes and heaviness at the base of the head at the back.
I ended up on the phone to Janiece from 09:26 to 09:46 and told her about the numbness in my left hand again; could it be my circulation................Well, I just don't know...................! 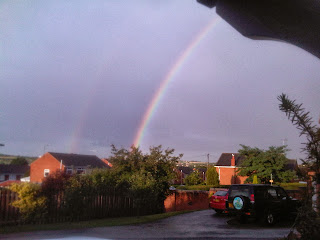 I made my way over to Janiece's as the Dr told me that I had to rest and to stop the walking and put my feet up. Bummer Eh!
That's me "Dun - In"


At least I could see a nice sunset again.
That cheered me up anyway.
A Double Rainbow on a miserable day.
"Red sky at night it a shepherd delight" 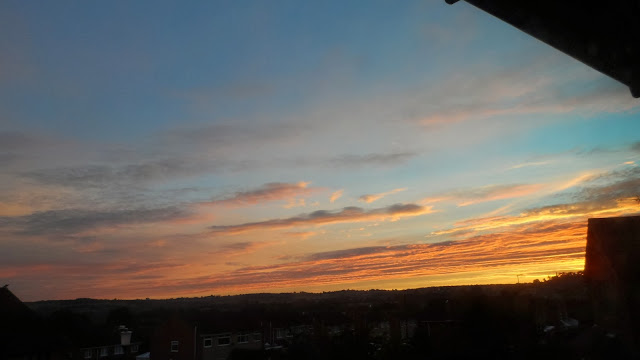 Posted by paulinesblob2.blogspot.co.uk at 6:56 AM