I decided to put this blog out tonight after my meeting with Mr Toby Perkins MP of Chesterfield
He is the Labour Member of Parliament for Chesterfield.
Shadow Minister for Small Business (BIS) 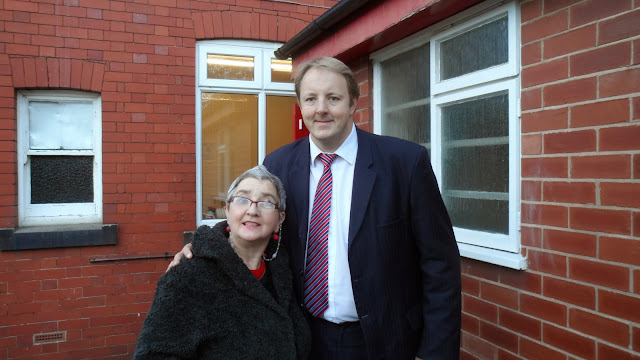 
I was reading a book called Garnet Hill, by DENISE MINA, in an area of Glasgow.
The lines were:-
"Yeah she is unwell," said Maureen, grateful for the euphemism. "There's a thick streak of Celtic melancholia in our family. It's the Irish blood."
"Celtic melancholia?" Brady looked at her blankly.
"Alcoholism."
"I see," said Brady. "They said you were from an unsavoury family."
Maureen dropped her fork. It clattered onto her plate. "Who said that about my family?"
"The police," said Brady, and smiled at her in a way that was oddly insulting.
"What is an "unsavoury family? Are they all drunks?"
When I read this book I had shivers down my spine....Brrrrr!
When I had went to Cleethorpes with Headway on Saturday 14th of September, I'd had a fantasic day.
On Sunday the 15th of September, I phoned my dad for a wee chat to bring him up to date about my seaside trip.
Towards the end of our conversation he told me that he has sent a present for me with Christine Burns, (my eldest sister) I thought WoW!
What gift shall it be??
I decided not to mention about the present until it arrived so I could write about my gift, so I waited, and waited, and waited, and waited, and....................................waited. I never had any present so I waited again.
It got into October the 4th and my Brain Injury NHS Steve Jones called me and said that we needed to have an appointment as he had a letter for me from Christine Burns.
I arrived at our meeting on Friday 4th October 2013
I got quite excited as I thought that this must be my present from my dad....Ooooooh! Excitement!
Well, when I got there, he put the letter on the table from Christine,...........I looked at it?!?
I thought; should I read it, or not?!? Confusion ran through my mind, where's dad's present, I thought?
I waited a few minutes, then lifted the letter up, then read it out in the room ..............................
***********************

Well; I said to Steve "I do know who my dad is; I call him!"
Then I said;
"She's giving up her accountancy job and is learning to become a Rehabilitation Support worker/carer!"

I was busy on the Saturday so I called my dad on the Sunday 6th October.


On the 6th of October I asked Mr Toby Perkins MP if I could have a Surgery soon, I needed to talk.
I said that I would be patient and just wait for my time on the waiting line.
The next day; the 7th of October;
I sent another message to the MP and told him that I was mortified what had been done by my elder sister Christine.
I felt that she didn't do what my father had requested her to do.
My father had sent £250 for me and the same amount of money to my brother Brian in Glasgow.
My head was all over the place after what was done.
I was totally SHOCKED!
I'm still in shock even now, how can people get away with taking my CHOICE away from me.

It's now the 7th of October and I called my dad back, he was very upset at what had happened.
I said to my father that if I wanted to buy £250 pounds worth of chocolate and eat it all at the same time and be sick, that it is MY CHOICE!
My father said that he had spoken to Christine on the phone and she had said to him that I was not sensible enough to have that much money and be resposible with it???

I thought that when you're alive, you can be as silly or carefree as you can be with spending money, surely THAT'S YOUR CHOICE!!!

Later that evening I recieved a phone call from Christine, I said that I didn't want to talk to her and hung up the call.

I sent another message to Mr Toby Perkins MP for Chesterfield, I was so upset I sent him details of what happened and I said that I needed to talk to someone.

I recieved a reply later that night from Mr Toby Perkins MP.
"What a very thoughtful man, He Listens!"

At last, he has made me feel better that we can discuss this situation about Christine and the money which should have been a present.
Brian still hasn't recieved his present either, but my concern is my poor dad!
I never had the money at the start, so it has just gone to a different abode instead.

My other concern now is that; if this is how my sister has treated me; a sibling; after my trauma and the disability that I had...........what about others/strangers that she will be in contact with as she is training as a Rehabilation Support Worker/Carer???
It will make you THINK!
IT MAKES ME THINK !
If she thinks that I'm not a stable, sensible person under the Mental Health Act; I wonder how she thinks about others that she will look after???


Do I allow this to happen and let people away with this?
OR
Do I shout from the highest pinacle of the highest mountain and let myself be heard?

What happened to the Brain Injury Rights?


Lets all shout to be given our Choices back, this should not happen to any of us!
I shall shout for us ALL!

Posted by paulinesblob2.blogspot.co.uk at 4:54 PM