I was quite lazy this morning after my scaredness that I was in after last night.
David had gone to Letchworth to pick up the kids. Aaron and Adrian were ready to go off to University. It wasn’t enough just to use 1 car so David chose to help as they were twins doing 2 Uni’s, it must have been left, right, backward and forward. Mixed up over 2 destinations, gosh I’m exhausted just thinking about it. Phewww.
Aaron is going to Staffordshire University to study Forensic Science, and Adrian has joined Loughborough University to become a Sports Science teacher. What a great future they will expect for themselves. I can imagine all the work they will have to do to succeed in their dreams.
I wonder what impression Jake has about his future. I shall think now. Jake would you go for a physician, lecturer, scientist or just a brainy guy?
MY SPECIAL HERO’S 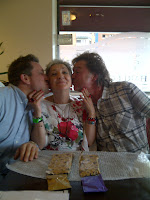 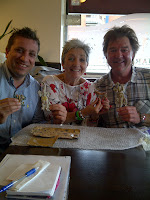 Janiece drove me into Sheffield to the Harlequin. I had my invitation. WOW.
Cristian was up from London for a visit with me. I was so happy at my friends little get together for us. I was so pleased that Cristian Concari was coming from London to visit me. I was so excited at his arrival again.
Cristian Concari and Richard Green both arranged to invite me to have Sunday lunch with them at the Harlequin public house. I used to be there a lot before I had my haemorrhage. I really liked  the  chattering with the boys. We would talk about anything and everything all those days ago, we were great talkers. Did it matter that I was a girl!! No. I spoke as any man would talk. I loved it.
I met Cristian Concari, an Italian, he gave his name to the Harlequin Cristian Concari Burger, he is the Bar Manager in the Pullman Hotel, St. Pancras, London.
I met Richard Green, he was very English, his accent would make me imagine how many accents was there that I can remember now.  He had his Sheffield office and shop down on the canal in Sheffield. Richard Green’s head office was in London.
His “Worn By” Limited fashionable rock and movie star clothes  were very fashionable and  popular. Hey, I even want some for my wee self.
One of these days eh!!! 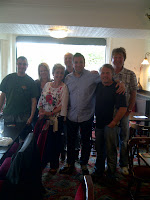 You can check him out on www.wornby.co.uk
Lisa Faulkner was there too, she works at the Mercure where I worked before my sickness. Andrew was my colleague  at the Mercure too. We  both worked in the bar area. Andrew is a great worker. He works part-time down at the canal, next to Richard Green’s shop. We all have a good time with the humour like before, it’s great. Andrew must be so knackered after his full-time job at the Mercure, and part-time at the coffee shop. It’s quite costly looking after a child no matter where you are from.
HARLEQUIN
I was ready to put in my meal order. We had a choice of the Sunday dinner or the bar menu food, I was already to order food before I got in there with what I wanted to eat. I had planned that I  wanted to eat???????
CRISTIAN CONCARI BURGER
Yes, it was the Cristian Concari Burger. BLAST, BIG BOY DAVE said that there wasn’t any burgers left,. I just wanted to cry in a corner as I was looking forward to eating the burger. I will get it another time. We all had Sunday dinners which was very yummy. Their was a mixture of the meats on our plates. :)
You could just laugh and laugh at everyone’s stories at the table, what great conversation we all had. We were talking about the Abbey, the 193 steps, the Covent Garden Tube Station, Leon and the Sunday Lunch.
PeterRoberts
He joined us for our chatting
LANZAROTE
Richard was going to Lanzarote, one of the Canary Islands on Tuesday. He said that his mum, Jean, was going on holiday with her friend.
Well Richard was leaving on Tuesday to meet his mum out there. He said that he was going to the North Coast of the island, I haven’t looked at a map yet.
Is the North Coast biking now or was that 2008???
I’ve got too many things going off in my head at the same time, BLAST AGAIN!!! They were all going to be in the Paradores Hotels in Spain. You can look at the pictures in the email address for any interest to you:- www.paradores.es/en
Richard was going to stay at the Parador de Hondarribia.
Were you going on a bike? Or did you go on a bike in 2008? What is a cannon half?
My hearing has been so loud to me and I still don’t know what I have to listen to first. Just like David speaking on our journey for the holiday.
Do I really know what I’m listening too?????
MILAN
Cristian was speaking about his sister Ketty Soresina and his mother Fiesco.
I’ve known Ketty for over 10 years. I remember meeting Fiesco, we said “Hello” and shook our hands. English was very awkward for her to communicate with me in English but a kiss and cuddle was the best thing for us. “Chiao Mama, XXX”.
Ketty and I, our relationship started in Glasgow,  what memories we have had. When I moved into this rehabilitation house Ketty was sending so many text’s to me, she was so excited that I was so alert and alive.
YES. Ketty, I am coming to Italy. OK. Very, very, soon XXX
Cristian had told us that they had taken a video of their home in the winter with the snow, the trees, the smaller Alps, the lights, the clouds and the moon. It sounded so perfecto with his Italian accent.
Richard and Cristian were discussing with me about the charities that I have accepted so far this year.
Now in April next year it is NEUROCARE CHARITY.
Emma Douglas at the Neurocare Charity offered me April next year, so I said YES. :)
As we carried on with the charity discussion, I just offered, YES, I OFFERED Richard to drive me there. Sometimes I just jump in without thinking about it.
My knickers are usually down by my ankles eh!!!
Now, before I had my haemorrhage I just bought a beautiful blue car.
IT WAS ALL MY OWN. It was my special little trooper on four wheels.
Janiece just keeps the “BLUE BABY” engine running over for me. I bought it before my accident or should I say my injury.
I remember going for interviews in the Peak District with Cristian at that time.
We were both fed up where we were at that moment in our lives.
We enjoyed the driving and the interviews, it was all very exciting for us.
I will drive again/soon. :)
My life is jumping in front of me so quickly.
Well at this moment in my life I’m not allowed to drive just now. “DRUGS MAN”  V
Now the V is my two fingers going peace man in a  “V” to the sky.
I’m very clever.
I can get into MY CAR just now as Janiece is my chauffeur right now. OOPS!!
Why do I want.......... things done yesterday!!
Richard then said, “Take a fast train ma bebby!!”
The Letter :- BOX TOPS
JO COCKER
JO COCKER – I imagine he is a 70’s singer – YES!!
Now what was that all about??? Richard wrote the letter and names in my book.
Do I know why??? Confused again. Can I really understand any of it :(
Janiece showed Richard a photo of the Ferrari Scooter.
That was my present from Salou to Richard.  Yes, a picture!! I had no camera so Janiece had to be my photographer on our holiday 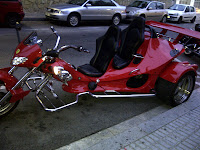 It was a 3 tyre scooter. It’s nice to share a photograph. I can just imagine the red scooter growling down the high street with Richard and his smile.
I know he loves the bikes. What a beautiful present from me.
I usually say “2pee or not 2pee”   It’s good that happiness costs nothing. :)
GOODBYES
We all had such a wonderful afternoon with all the food and conversations.
We all had the warmest cuddle and goodbye kiss. What a perfect day.
I love the fact that I have my mouth back. I remember when I started talking again.
Did I make any understanding or knowledge of the words that I used. Oops no.
I just love the fact that I photocopy every thing that I do in my life.
I keep on top of my life just now, it’s very special to me. This is my greatest diary.
I put down how many picks at my nose? How many loo journey’s?
The best thing to have is your humour, that’s priceless.
I can see for myself all the writing errors that I have used so far. It’s nice to see and understand the physical improvements and errors that I have achieved in my brain.
Now my legs and eyes and hearing and my blood circulation and another doctors look at my ladies “Doo, dah, day”. I seem to have a problem, one after another problem these day’s. Will I ever be able to sit back and fully relax.
My brain races so far ahead of myself. My head is so far behind my brain these day’s.
I have had such a great day with my friends at the Harlequin. What an experience I had today, every day is a new experience for me, to learn is such a hard job for me.
I will get there, one of these days. :)
GOODNIGHT XXX
Posted by paulinesblob2.blogspot.co.uk at 8:49 AM