I opened my eyes………….I didn’t care about the time……….
I knew exactly where I was………………………..I was at Des’s home.
The feeling that I had in my body was amazing!!!
I felt so content, I knew where I was.
Usually I have a heavy leg, like it does not belong to me any more.
Standing up in the morning, when I go to leave the bed, I can feel everything working itself in my body. I usually wonder what bed I am leaving from this time.
I moved quietly passed Des’s room and then Janiece and David’s room.
I was careful not to make any sound to waken them up.
When I got downstairs I used the loo. I didn’t want to use the bathroom upstairs, I thought it may make a noise and waken them up!!!
I was as quiet as a mouse.
I made myself a coffee and brought out my pc to catch up. Once I was ready I had to go to the loo again for some paper for my nose. My nose kept running. (no crying J)
I felt quite snuffled. It felt great that I was getting a COLD.
Normally I would moan and groan about a cold, but now, I love feeling the things that happens in my body. I’m a wee detective now.
PICTURES
I moved over to the lounge with my tissue in my fingers. Sniff, blow, sniff, blow.
I was so focused on the pictures on the table at the window. I sat on the end of the lounge table and I was scrutinising the pictures. I kept looking at them, I still had my coffee in my other hand and I stared at the pictures and then the CD’s.
Jake’s little plaque was in front of his picture. I knew that Jake bought that for his grandma Joyclin, the words were most loving and caring. I started thinking about the ages in the pictures now. I seen a picture of David as a child, that was cute and then I actually knew what twin was Aaron and Adrian. I’m a genius again :)
All of a sudden I heard some words from the kitchen. I turned around and seen Des??
How did he get passed me without me knowing??
I think that my mind was on so many things in my washing machine brain.
My brain flopping here and there and everywhere.
I went over to Des and I told him what happened yesterday.
All of my emotions and thoughts and feelings were right in front of him.
Des then said to me that he was going to the cemetery to see Joyclin.
I was quite cheeky and asked Des if I could join him and to pay my respect to Joyclin.
Des agreed and I thought, I need to butter up Janiece and David for our transport.
I sat there clicking away on my p.c. and Des started to cook our breakfast. 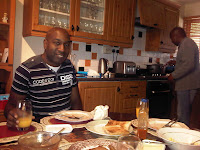