It’s 05:30am. I have always got up early for work. It’s a natural sleeping event. My body knows exactly what it’s doing. I’m in my old routine. Hallelujah, Halleluiah. I always look at how many times to spell a word differently, that makes my brain work for me. Clever Brain, Eh!
MEMORY THOUGHTS
I found an old piece of writing last night. There were so many pieces of paper with my thoughts on it. I found the paper dated on the Friday 29th June 2012.
When I went downstairs, I spoke to Big Mamma Dee & Brainy Big Boy Dave.
I spoke to them about my thoughts that I wrote in 29thJune. I used to write on the board at the kitchen, I always put down my thoughts. I  don’t  bother about that now,  as I write my thoughts and feelings every day for my blog.
On the 4th July 2012 (AMERICAN INDEPENDENCE DAY) (FIREWORKS) that is when I went to tell everyone my whole story, my day to day life, on the net to the world.
I shall tell you about  my hand writing for the day 29th June:-
“Today is Friday 29th June. I am soooo ALIVE!!!. 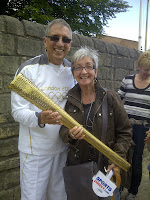 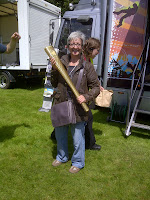 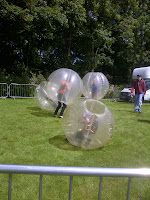 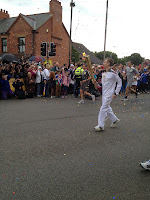 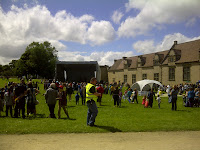 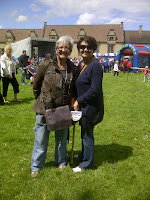 I went to Bolsover Castle and got my pictures with the torch bearer, and “whatapalaver”  the great entertainers at the Castle. The area was filled with young and old people. There was the fencing, the climbwall, the racing, mountain bike riding and   Judo, and the Zorb, which is big rubber balls that they bump off each other. I have the pictures for all of you to see. I phoned my nephew Jed for his 22nd  year birthday. I went to the gym to watch Janiece do the spinning cycle exercise class...oh it was hard work hahaha. I moved to M****** Bolsover. About 5 weeks before I left Osbourne in Sheffield that was my last home.
I bring my fighter to my spirit”
MY THOUGHTS
“Daily Thoughts:
FRIDAY 29thJUNE
My thoughts :-
When I was a young punk, I used togo to The Blitz owned by STEVE STRANGE/VISAGE.
He was starting the pop group.
I am a genius.
I remember every day *WHOOHOO*
FADE TO GREY --- Music by Visage.
Well Steve Strange, do you remember my memories now. ??
We are now in 1981, I had just turned 18yrs old. I’ve just come from Glasgow. Yes, I’m Scottish.  I used to go down to THE BLITZ  Steve Strange owned the Blitz and you were singing in “Visage”. Hey Steve, you just started the band and that’s the same for George. Your cloak attendant was Boy George. Hey, even those years ago you did the right thing by telling George to put his makeup on a little bit better. He, He, He. A lot of people turned to New Romantics and  put on white makeup.
I’m the SCOTTISH beautiful brain Pauline Quinn, you let me and  my sister Janiece into The Blitz for no money, I popped in to see you. Thankyou, Thankyou, Thankyou
I still talk a lot. He, He, He. I have had my voice lost for a long time. My voice was lost in the dark blackness of my body,  this was in the 20th July 2011 but I have fought to get it back. I’M BACK. WOOHOO.
INVITATION.
I have my 1st dinner invitation back at my home. My guests are Ian Lewaine and Ryan Lewaine. 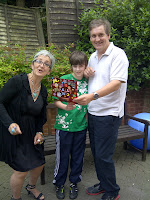 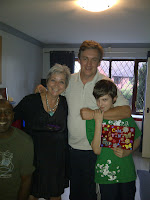 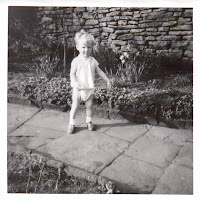 WELCOME. They will be arriving at 4pm. Ooh!!  It will be filled with so much laughter. Ha, ha, ha.
I got up early this morning and made their Welcome Card, (Hey, I can turn my hand to lots of things)
then I made a Birthday card for Juanita for her 27th birthday. Juanita got her card and then my picture of BO-DEREK. Do you know I’m a  PAINTER.

Ah it’s so pretty. “BO-DEREK you are beautiful” Hmmmm. Clever Me.
On my card this morning it is written :-
“SATURDAY AUGUST  11th 2012
This is my 1stguest for dinner invitation since my Subarachnoid Brain Haemorrhage in 20thJuly 2011. I have got out at the other end.
“WELCOME”
Ryan and Ian.
Enjoy
XXX
MEMORIES
I have seen Ryan’s pictures a few weeks ago. He wants to go into the army services. Ryan is only 12yrs old so he has another 4yrs to get older, to be focused and to be understanding with what his life will be like. He has organised his future wish list. These are all the requirements for his Service. He will be thoughtful, understanding, and listen to all that has been said by his Corporal, Sergeant, Majors.
He will be brilliant, focused, understanding, listening, strong, He will be the BEST. 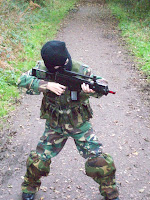 I can see him now in his ARMY FATIGUES, leafy things coming out of his hat, he had a face of someone with the future. He knows what he is doing, he is strong and focused.
WELL DONE RYAN.
Ian Lewaine done a 15hrs work yesterday. WOW. That’s a long day, but it was worth it for Ryan.
Do you know that the snake in the cupboard would eat a crunchy nut cornflake.
He, he, he. Good thinking snake. Hmmmmmm! That’s a good  thinking  puzzle Ian.
Does this gobble your head!!!
We have the BBQ on now as David is in charge, he is our CHEF. He is looking after our  food. He’s making sure that the food has a good cooking temperature and Janiece is making the PRAWNS in the kitchen as our starters. Yummy, Yummy. Ian and I loved the prawns. I like having two CHEF’s. Hey I’m worth it. He, he, he.
All of a sudden Ryan is bombarded by a wasp. SWIPE, SWIPE, SWIPE. Ahhhhhhh.
Ryan has his great Army espape from the bomber wasp.  He was diving away from the wasp, he filled us with so much laughter. He was very artistic with his faces.
We laughed, and laughed even more. Ryan thought that the wasp fell into his can of  Ginger Beer, we laughed again. Ryan thought he would send this insect to Mars !
My sides were getting quite achy, from the laughter. It was that laughing effect on my waist again.
Ryan was very dramatic with all his faces for us, then he started to talk and my voice became so silent.
Imagine, “What…..Me!  Being  Quiet !!!. “ Bell Done Ryan, for keeping your voice in charge of our conversation. “I THANK YOU”
We spoke about the snorting at school, Ha,Ha,Ha.
Ryan was a “GERMAN”, he, he, he.
Ryan said “Zenandukt, Dogginkrappen. Applestrudel.
We all replied “geil” or “gyl” that means super cool.
Hey Ryan say that in a German accent eh!
Hey Ryan I will say to you “Mein Schatz, or Myn Schatz = that translates and means my darling/precious. Hey what a great, precious brain.
We ended up talking about the Lady Bower Dam with the bouncing bombs for acuraticy in the 2ndworld war. Then we spoke about the Rise and Fall of the 3rd Reich, then we spoke about the wall crash in Berlin in 1989, from the Second War. Ryan, we were so cool with our conversation at the table. How old am I know?
FOOD REPLESHMENTS 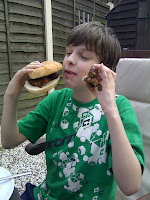 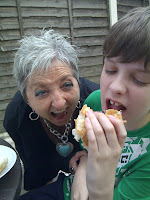 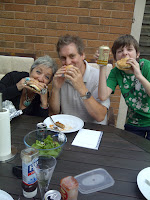 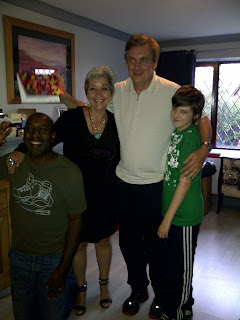 Share these kisses between you both, no pinching from one to the other.
I will be watching.
.
Posted by paulinesblob2.blogspot.co.uk at 4:06 PM