FEELING CONFIDENT.
I woke up so happily this morning at 7:00am. I had the best sleep, and I had the best memories of my dinner invitation guests to Ian and Ryan Lewaine.
Thanks guys. XXX
I went to the kitchen and make a tea and coffee for Janiece and David. I organised it and took the both cups to the bottom of the stairs. “Here goes.” I thought to myself!!
When I was at the stairs I had normally done my “Stair Juggling Task”- “My Craft.”
I then became a Fantastic Hot Liquid Transporter. I held the two cups in each hand, THEN, I moved my left elbow to touch the railing, to allow me to feel confident going up the stairs. WOW. I made it all by myself.  I didn’t even drop a sip of the liquids. Phewww!! I actually did it with two hot drinks!! I made a noise and they woke up at about 07:30am with the hot drinks, “MORNING” We all had a great night. WOW. There is enormous big smiles again, we were all giggly again and I still had to do yesterdays writing. Busy, Busy, Busy. Lots of writing to do from my memory, that’s all I use, just the words from my memory and from my pictures.
It never bothered me before, but I love my stories now. My imagination now can get so carried away with itself, it’s wonderful. We pottered about with nothing between our ears. We were nice and lazy on a Sunday. Eventually we got to lunch time, did we have our lunch?  NO,   no we all decided to have a brunch instead, about 11ish!!
ROTHER VALLEY PARK
SALVATORE XXX
I decided that we would visit Rother Valley Park. I wanted to look at the walk that I would do next April 2013. This will be a Charity Walk for NEUROCARE April 2013.
I will look for pictures of our funny, happy time in this park last year with Salvatore, I shall be a detective and look everywhere for them.
I recognised a car park area where I’m pretty sure that was where I parked last year in April? When we parked the car, I noticed that we were at a central customer area, the courtyard with the buildings. 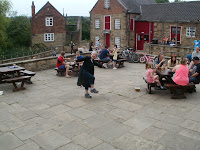 My heart started jumping all over the place. My heart knew that I had been here before with my friend SALVATORE. As soon we walked into the courtyard area, I knew where we sat. Ooooooh, my heart just jumps again, I’m so proud of being here to bring my memories back to me. THANK GOD. 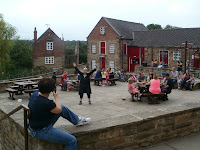 When we walked in to the courtyard I recognised the” craftshop” on the left hand side, we went upstairs, I know we went  there over a year and a half ago. WOW.
My brain absolutely active, it’s so thirsty for knowledge. I stood in the middle of the courtyard and posed there like a big star. My arms are flying about in the air and my legs are free. I love being free from my chair, I love being able to walk again and I really love doing my voice as well but, I can be nice and quiet now but I am a very strong person. 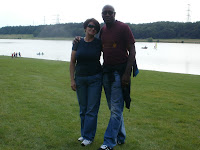 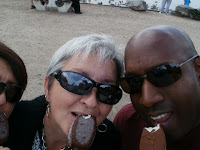 We got some ice-cream. Oh my goodness it was so beautiful, it’s like trying something for the FIRST time. We sit over by the water edge, and I can’t keep my head looking at one thing. I had to intake everything in my sight. 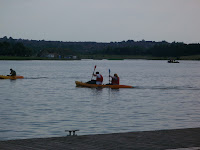 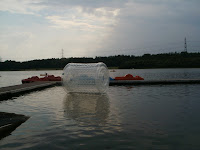 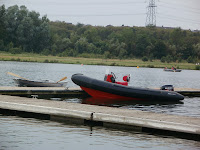 There was a big ZORB. Hey, maybe we can go on that another time!!! There was lots of canoes where we were sitting. There was pedaloes on the water, they looked so much fun to me so maybe that’s another experience for me. Woohoo. 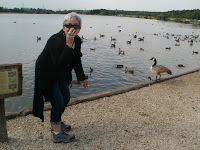 David had lovely feet.
There has been some lovely angels walking side by side. There is a lot of geese and ducks in the water, splashing about. I can imagine how happy they must feel in the water. 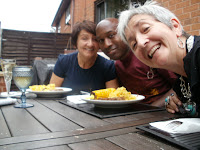 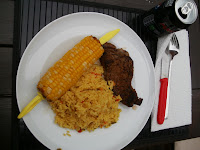 I thought that I was going to have a salad but I ended up with a steak. Hmmmmm.
We had a nice dinner out in the sunshine, it was steak, savoury rice and a sweetcorn. When we eventually finished our food, we started talking about my jewellery experiences. I liked working with the silver. It was a good way to use my arty talents. I remember going to Portugal with my jewellery class and I had a great time. 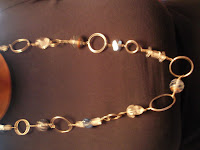 I made a necklace for Janiece, and a pair of handcuffs (oooopppss cufflinks) for David. The jewellery classes were so much fun, FUN, that’s a good word today. I’ve always had fun in my life. I had a fun lifestyle growing up. 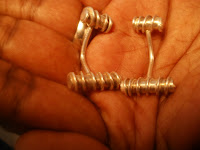 When I got home the Athletic performers were about to finish their journey here in London. I loved the music, colours, the sights, it was so beautiful on your eyes. The Athletic ending was a large sight  of  musical, colourful, beautiful sights in our city of London. The happiness and enjoyment of the singers were awesome. 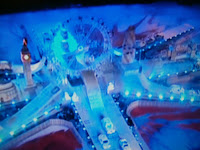 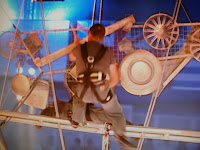 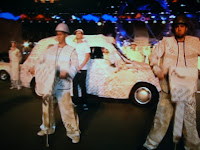 The head picture of the stage on the whole central athletic arena was just breathtaking. There was the high air drummers. They got raised by the wire jiggery. They were drumming on big metal clothing baths, motor car wheel rings, just about anything up this high in the air. They were very confident being so high up on a wire
The taxis and walkways and people in the stage were pretty cool in the fabric news. You must have been ready to read the paper eh!!! 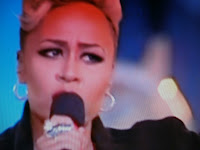 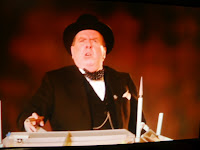 There was a Prime Minister from years ago it’s Mr Churchill talking out of a Thames building. I think it was our big clock. TIC, TOC.
During the speech from our old Minister who ran the country, he was very influential. He was very actor like.
The Military was placed on the stage and then it was Army, Navy and Air Forces.
The guys brought down our GB FLAG. 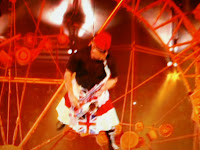 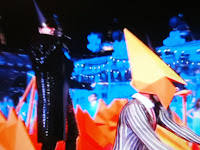 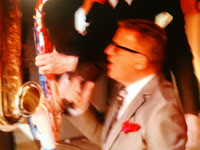 We then had the music from MADNESS, that was great.
Then we had the black trousers and red coats and the big black fluffy hairy hat with the chain down at your chin, they are usually outside the HRH Castle London.
Next it was two young boys with black jackets with pointy hats and black glasses.
I do know the name soon, (I hope so, I’ll keep my fingers crossed and maybe a wee prayer.) PET SHOP BOYS Wooohooo
Bycicles were then next on our show. They all had yellow pointy hats and their faces were dancing with their music. 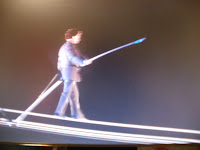 There was a high wire man, keeping his balance on his wire, with the large *hand leveller* Hey that’s a good name!!!
Everone was  dancing  late into the nite. The tv guy was FREDDY MERCURY with the black hair and moustache
Then we had ANNIE LENNOX. She had her music bumping in the evening for the guests. 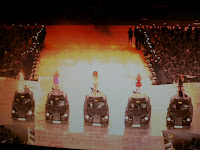 We then had THE SPICE GIRLS. All the pop acts that they had were awesome :)
Each girl had a black taxi, they all had the roof,  ready for their presence coming through for a great big wave. They done a fantasmatolla presence.
I love making up words quite a lot. I have given staff all new names but I know who is who, it’s a pretty cool game for the brain. 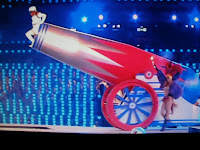 There is a guy in Indian shorts, living in the 1900’s. He climbs on top of the big bomb and get’s into the bomb mouth, the fireworks go off and he falls out of the bomb mouth. The actor falls into his blethering again, wow, what a life style for the finale.
They then had a big crowd of ladies in their old fashioned nun uniforms
It’s as if they just came off from Julie Andrews movie “Sound Of Music”.
Hey I’m singing to it now. Ha, ha, ha

The Indian dressed  guys have arrived from the start on the 1900’s, (magical).
We now have a large vision of EROS, she is a great EROS.
TRUTH.
We then had another guitarist and pianist rolled into one person who sings too. 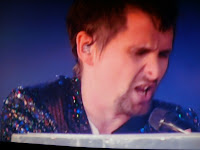 I can’t remember his name just now, well I have had a year off now, well, it’s not too bad for me. I’m writing this now from Tuesday 14thAugust .This Sunday blog was 2 days ago I don’t write anything in my diary anymore. I only put down on my diary my Doctor’s, Dentist, maybe my friends attendance or invitation. My brain is so alert. I can see what changes in me every day by day, just like my  blog. When I wrote this blog on the Independence Day, 4th July, 2012, I started to write my day by day story. I started for my blog with 3 or 4 lines for my day, he, he, he. I now do 3 or 4 pages for  basically just pottering about doing …….nothing…….
THE FINALLE 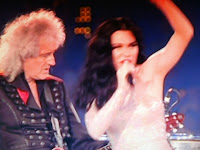 Take That sang and it is nearly the end. Jessie J has come on the floor to sing. I get pimples all over my body. LOVELY. It’s great feeling the sensations. We then have the men singing in the choir, it was beautiful and it touched you.
The OLYMPIC FLAG is then sadly brought down by the army, navy and the air services. Then we have the picture of the Great Britain Flag seen from the air which was their stage and the big torch at the end of their flag. The head ministers wave the flag to all of our guests here and abroad.
Is the next Athletics in Rio De Janerio or Boliva ?????
Am I right or wrong. Hmmmmm!!!
I think the Brazilian flag is Green, Yellow and Blue at the middle. See you in 4yrs.
Everything is beautiful Everything in the centre is dark just with the torch alive 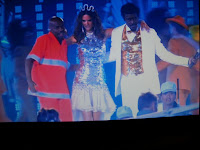 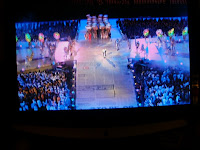 The local Brazilian foot dancer …soul man is doing a SALSA.
The big wheel is alight except one with the flag on it
With salsa on the stage, they were wearing roller boots. It was a pretty sight.
People are showing off their Medals. There is a Lady in a white dress with blue in her dress, their is a lot of men at the side dressing. We had PELE, He was awesome for Brazil
Is a glorious sight from the sky wow all the colours and the  fireworks.
There is a Minister for the Athletics now leaving a speech for the Torch behind him.
GOODBYE, GOODBYE, GOODBYE. XXX
Posted by paulinesblob2.blogspot.co.uk at 6:24 AM